With the uptake in electric vehicle (EV) sales accelerating at pace, it is not only demand on the network that is a challenge to overcome. In the UK around 40% of people do not have access to off-street parking, such as those living in apartment blocks, creating a barrier to make the switch to electric vehicles. 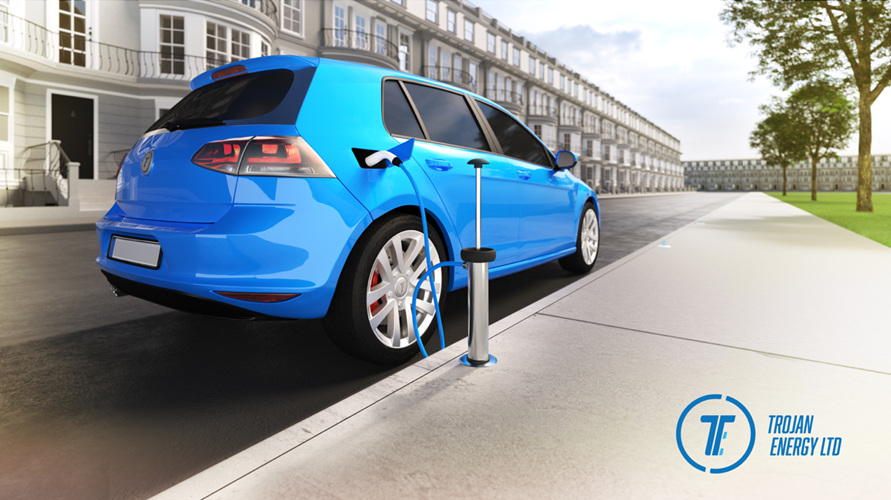 In fact, evidence shows that 98% of current EV owners have off-street parking and only 2% of those who park on-street have made the switch. The on-street furniture that EV chargers currently need is not only a blocker for those living in flats, but could also be deemed hazardous and unsightly on streets in and around natural sights of beauty.

Trojan Energy has developed an answer to the challenges mentioned above by developing an AC charging system which is designed to minimise kerbside street furniture, keeping pavements clutter-free. The charger’s interface is a flush connection where the charge point is slotted into the ground. The EV user will have a lance which interfaces with the connection point and the EV.

The PNDC’s objective was to test the prototype under realistic loading scenarios, paying particular interest to the heat generated by the novel system, which was measured using a thermal imaging camera.

During the three days of testing, a PNDC research engineer was able to assemble, debug and test the entire charging system. This included support from a PNDC technician who energised the system and debugged the equipment. The PNDC provided a low voltage power connection to the Trojan control unit which powered the three EV chargers. During the scheduled tests, a Fluke power quality analyser was employed to monitor key factors such as voltage, current and power consumption.

Trojan Energy’s prototype underwent several thorough tests, using realistic loading scenarios. These tests generally investigated the effect of three chargers charging at different rates. The majority of electric vehicles are charged by using a single phase AC charger with a rating of 7kW. Some vehicles such as Tesla and Renault can charge up to 22 kW from a 3-phase AC charger so this study considered a mix of charging scenarios.

Pinnacle to the overall testing, was the four-hour-long test whereby 3-phase loads of 22 kW were connected to each of the three of the prototype EV chargers (equivalent to charging a Tesla or Renault model for four hours). The system performed well, with no issues observed mechanically, electrically or thermally. This was of great importance as charging for four hours is a highly probable scenario for on-street charging.

Such prolonged and realistic tests proved that the patented prototype was thermally safe and operational.

For the client, the value of testing with the PNDC lay with the support and experienced judgement from both research engineer and technician throughout testing. The PNDC testing facilities were a safe and controlled environment to work the prototype to limits which members of the public would do on streets.

The PNDC has been able to instil confidence within the Trojan Energy product allowing the client to progress with the knowledge that it can reach its full functionality safely.

Ian Mackenzie, of Trojan Energy, said:
“Following successful maximum load testing at the PNDC facility we were able to confirm our charging mechanism had met all requirements from both an operational and safety perspective. The experience of the PNDC team and their exceptional support ensured an effective testing period, which has provided validation of the hardware performance prior to next-phase of development.”